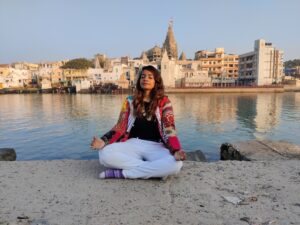 I recently visited dwarka for 2 nights 3 days, the city of lord Krishna, a land of ancient temples, ancient culture & beautiful beaches. We had a flight from mumbai to Jamnagar airport. After reaching  jamnagar airport, it took approx 2 & half hour to 3hrs to reach dwarka via private car. After reaching there, we came to know many things which you all would definitely love to read about the city. Let me first tell you the history of Dwarka.

Dwarka is located in the western most part of Gujarat. It is known as the ‘golden city’. The town has religious and historical significance because according to Hindu folk, the place is listed as one of the ‘sacred’ cities. The name comes from ‘dwara’ which means door and ‘ka’ which means Brahma and hence, the city is said to be the spiritual gateway to the ‘union with Brahma’. According to the ancient hindu saints, Dwarka was submerged under water after the demise of Lord Krishna, it was rebuilt a number of times later. Situated on the banks of the river Gomati, Dwarka is a popular pilgrimage city and is visited by a lots of tourist. Dwarka is one of the Char Dhams located in the western corner of India. The other 3 are Rameswaram in the South, Jagannath Puri in East and Badrinath in North. Dwarka is often identified with the Dwarka Kingdom, the ancient kingdom of Krishna,  & is believed to be the first capital of Gujarat.

During  Janamashthmi (Birthday of Lord Krishna) Dwarka is lit up with thousands of tourists performing their prayers and enjoying the festival. Let me take you through the best places to visit in dwarka. 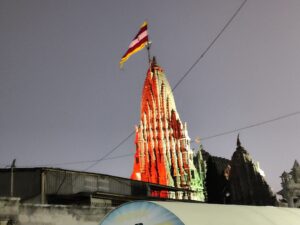 1. Dwarkadhish Temple – Dwarkadhish temple situated almost on the western tip of India where the River Gomti meets the Arabian sea. The Dwarkadhish Temple, also called Jagat Mandir, located in the mid of Dwarka. It was built by Raja Jagat Singh Rathore, hence it is called Jagat Mandir. The giant temple stands an elevation of about 80 meters tall. Temple is made of limestone & has intricate, carving on exterior. The main shrine had 4 floors representing the char dhams while shikhara is 7 storestall. On top of it is 25 ft long flag.

The 52-yard flag of Dwarkadhish temple is changed 5 times a day – 3 times in the morning  and 2 times in the evening. It is a spectacle to watch. The flag has an emblem of sun and moon on it. The temple has two entrances – north and south called Moksha Dwar and Swarg Dwar.

Best time to visit is between november to february. 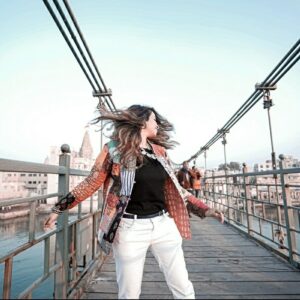 2.Sudama setu – Sudama Setu is a pedestrian suspension bridge that allows easy access to the beach and other places across the river. It’s a wonderful experience to stroll along the bridge which gives you panoramic views of the river, temples, and the ocean. You can visit the Laxmi Narayan temple and panch Pandav kund across the river or simply enjoy  the scenic beauty from the bridge.

There is no better place than standing at Sudama Setu – the cable bridge joining the two edges of the Gomti River. The bridge provides wonderful views of Dwarkadish Temple, Gomti River and the Arabian Sea. Just like there is Ganga Aarti in Kashi, Rishikesh, and Haridwar, there is Gomti Aarti here. It is not that grand. It is a simple aarti that takes less than 10 minutes. It happened around 6:30 PM.

We came back to sudama setu next day early morning at 6am, as it opens by 7am & to witness the beautiful sunrise which was magical.

Camel rides, Boating and ATV bike rides are available across the bridge, which are exciting activities to do. 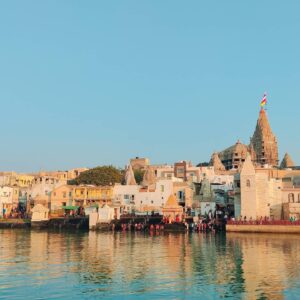 3.Gomti ghat -Gomti Ghat is calm and peaceful place to spend a few hours after your hectic Dwarka sightseeing. Located right behind the Dwarkadhish temple, it is believed that you must take a dip in the holy water before visiting the shrine.

Watching the confluence of the Gomti River and Arabian Sea and witnessing the sunset is a magical experience. One bank of Gomti is full of temples and ghats, the other is a sandy beach next to it. I took a boat ride for a great view at gomti ghat which costed us 100rs Per person. 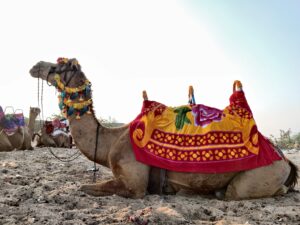 4.Dwarka beach & light house– Not far from the Dwarkadhish temple is the Dwarka beach  along the Arabian Sea coast,which will make your Dwarka sightseeing experience great. The breathtakingly beautiful setting with golden sands and clean water is amongst the best places to visit in Dwarka.

It is the perfect spot for a refreshing morning or an evening visit to witness the sunset hues. Also fascinating is the lighthouse located at the end of the beach, completing the perfect setting for a stunning beach click. Lighthouse at the Dwarka on the Dwarka peninsula,gives a panoramic view of the city. 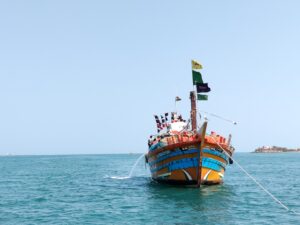 5.Bet Dwarka– Bet Dwarka is an island, located about 30 kilometres from the town. This island has temples, coral reefs and white sand beaches. This temple is dedicated to Lord Krishna here it is said to be the residence of Lord Krishna and his family. It is the main temple that people come to see  here.

Via car we reached okha port from dwarka for bet dwarka,it took 1 hr appox to reach okha port.We reached here at 11.30am & took a ferry boat at okha port to reach bet dwarka. It is said to be built 500 years ago by Vallabhacharya. Bet dwarka has white sandy beaches and corals. Bet Dwarka is also amongst the best places to visit in Dwarka for water sports, dolphin spotting, camping and picnics.

The ferry ride to the island itself is a mesmerising experience with windy air,clean water, watching lots of seagulls flying on the top of boat for food.

Timings:  This temple remains closed between 12PM to 5PM. It is good to reach by  5:30 PM to avoid the crowds and enjoy the sunset views or visit early in morning.
Ferry Cost: INR 10-30 Rs per person. Bigger groups can hire a private boat for INR 2000 for a hassle-free and enjoyable experience. 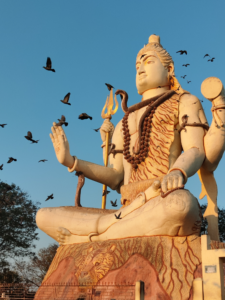 6.Nageshwar Temple – Nageshwar tempe is an ancient Hindu temple located at Nageshwar village in Gujarat. It is  nearly half an hour journey from dwarkadhish. Also known as Nagnath Temple.

Nageshwar Temple it is said to be one of the oldest temples in the Shiva Purana. The Jyotirlinga has a special significance in Nageshwar as this is believed to be the first of all 12 Jyotirlingas. This powerful Jyotirlinga symbolizes protection from all poisons and is believed that one who prays here gets freedom from all kinds of poison.

According to saints,once lived a demon called Daruka, who was  very cruel and tortured the people. One day he picked a Shiva devotee called Supriya. The prisoners were held in the underwater city that was surrounded with sea-snakes. Supriya advised all prisoners to chant the Shiva mantra ‘Aum Namaha Shivayay’ to protect them. When Daruka came to know about this, he came to kill Supriya. Instantly, Lord Shiva appeared and killed the demon and went on to reside in the powerful Jyotirlinga.

A 25 m tall statue of a sitting Lord Shiva and a large garden with a pond are major attractions of this place.The Shivalinga at Nageshwar is a Tri-mukhi Rudraksha which is 40 cm high and 30 cm in diameter.

Close to the temple is another spot called Gopi Talav Tirth, a lake that is connected to the gopis visiting Lord Krishna and said that the gopis gave their lives here. You can feed fishes over there.

Shivaratri is the main festival celebrated here with great enthusiasm at the temple. On Maha Shivaratri, a huge Mela is held in the grounds of the temple and thousands of people come to the temple to witness the festivities. 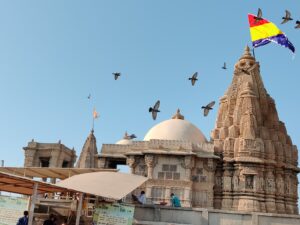 7.Rukmani devi temple – Located just 2 Kms outside the city this beautiful temple dedicated to Lord Krishna’s wife Rukmini, is an architectural masterpiece which must be included in your list of best places to visit in Dwarka. It has Beautiful Intricate carvings with sculptures of gods & goddesses on the exterior of the temple.

It is said that Rishi Durvasa requested Krishna and Rukmini to pull a chariot to take him to their house for a meal. On the way, when Rukmini asked for water to satisfy her thirst, Lord Krishna digged the ground with his toe, and the River Ganges appeared. Rukmini satisfied her thirst but forgot to ask the Rishi if he wanted a drink of water too. Durvasa felt insulted and therefore, cursed her to live separately from her husband. 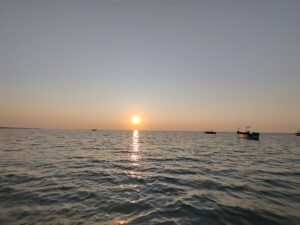 8.Shivrajpur beach & lighthouse – This serene beach is located near Shivrajpur village on the Arabian coast of Gujarat. This is one of the most famous & beaches in Dwarka and best places to visit in Dwarka . The clear water and the white sandy beaches of shivrajpur beach offer a wonderful sight to the eyes.

Shivrajpur beach has received the globally recognised eco-label awarded by an international agency ‘Foundation for Environment Education’, Denmark. Blue Flag beaches are said to be the cleanest in the world.

It is among eight Indian beaches to get the prestigious Blue Flag beach certification. Ghoghla beach in Diu near Junagadh, is also among the 8 beaches in India that have been awarded the certification. The other 6 beaches are Padubidri in Karnataka, Kappad in Kerala, Rushikonda in Andhra Pradesh, Golden Beach in Odisha and Radhanagar in Andaman and Nicobar Islands.

Shivrajpur Beach is a beautiful beach which has clear waters and white sands, is one of the best places to visit in dwarka The beach offers stunning sunsets and picturesque views. It’s an ideal place to spend some peaceful time with family and friends & one of the highly recommended places in dwarka on my list.

The beach also hosts a variety of water activities like speed boat, scuba diving, snorkeling,jet ski,banana boat ride, and there are a lot of food and shopping joints available in the area. Best time to visit is around 4.30/5pm to enjoy activities & view magical sunset.

You need to do online booking for scuba diving or come early in morning to book & experience the same. It cost around 2500 per person & you need max 3 hrs of scuba diving.

Never thought dwarka will amaze me with such an architectural beauty,intricate carvings of temples, ancient history about temples, about culture of this place & clean beaches. We have been to gujarat many times but never seen such serene & pure place to be at. This place should be in your bucket list of places to visit in Gujarat. Thank you gujarat tourism for giving me such an opportunity. 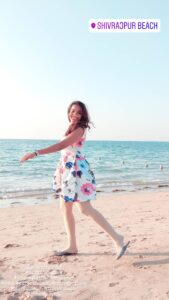